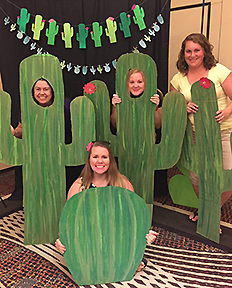 For my fourth and final Omega Phi Alpha President’s Project, I’ve decided to go a little off the wall. When my three-year term was extended to four years, I started thinking about what service I might want my fourth President’s Project to be. And, to be honest, I had no clue what I was going to pick. Then, in February of this year, I received an email from Lynsie Patschke, an active at Delta Chapter at Texas A&M University. In the email, she gave me a suggestion for the President’s Project. In my four years as OPA’s national president, I had never received anything like this before. I thought, “Who is this girl who thinks she can tell me what my project is going to be? That’s the one cool thing that I get to do as the national president!”

And then I thought about it. And I thought some more. And then I realized that, while I’m not passionate about the cause Lynsie suggested, she is. Every pledge that comes through OPA has had the thought: “It’d be cool if I was national president, because I know exactly what I’d pick for my President’s Project.” Just because I’m not passionate about a cause doesn’t mean that another sister isn’t.

So, going into our 50th year, I’m turning the power back over to our members. Inspired by Lynsie, my President’s Project for the 2016–17 academic year is “Chapter Choice.”

Each collegiate chapter will notify the national office of its choice of cause by September 15 (or email it here.). They’ll devote two or more service projects to this cause during the school year. Alumnae chapters can get in on the fun as well—pick a project the next time you meet and devote a day to it.

For individual alumnae, I want you to take this year to focus on a cause that inspires or moves you. Spend a weekend volunteering at an animal shelter. Help out at a hospital. Hand out water at a 5k race. Anything goes, as long as it’s something that’s important to you.