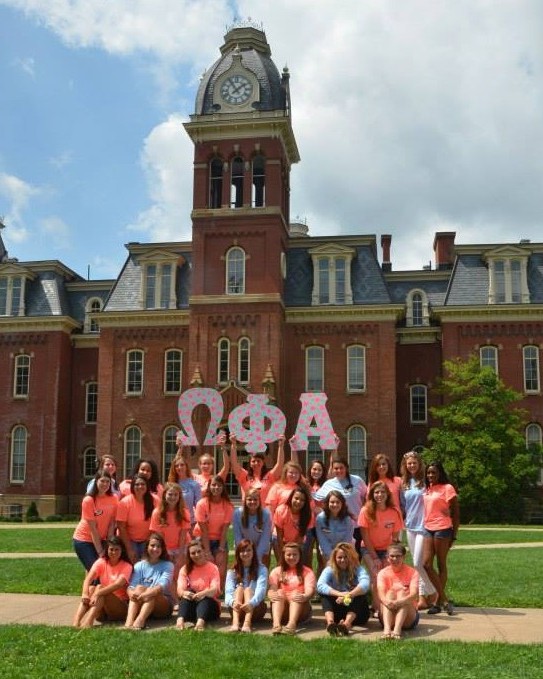 Omega Phi Alpha welcomes new groups who wish to form a chapter: a recognized local unit of the sorority at their college or university. With sufficient interest, students can petition the national organization to form a “colony,” which is simply a temporary affiliation with the sorority. Once the group completes the requirements to earn a charter, each of the founding members will gain lifetime membership into Omega Phi Alpha. Starting an OPA chapter takes hard work, dedication, and spirit, but it is a challenge with many rewards.

One individual will act as the campus contact and work closely with the national expansions director to set up an informational meeting where the colonization procedure is explained to other prospective members. When 25 or more full-time students demonstrate a commitment to the sorority, they can petition to be a colony. The colony must meet a series of requirements, including establishing a program of service, and participating in at least five different colony-sponsored service projects. Membership is open to any students in good standing with their university: freshmen, sophomores, juniors, seniors, and even graduate students.

If you would like more information about starting a collegiate chapter, email the expansions director at expansions@omegaphialpha.org.

What is Omega Phi Alpha?

Omega Phi Alpha is a national service sorority with active chapters at universities across the country. OPA’s membership is a diverse, multicultural group, reflecting a welcoming attitude. OPA is not a member of the National Panhellenic Council. Instead, Omega Phi Alpha is considered a Greek-letter student organization. New members who are willing to prove their commitment by fulfilling new member requirements are welcome, including those who are members of social sororities.

What is a service sorority, and how is it different from other sororities?

Most of the national sororities in the United States are social sororities. However, Omega Phi Alpha is a service sorority. The two types have much in common, but there are a few distinct differences. Like social sororities, OPA has a “pledge” or “new member” period, where prospective members learn about the sorority’s history and policies. OPA has big sisters, social outings, formals, etc., and recognizes that social sororities also participate in service projects. The distinguishing feature is the day-to-day emphasis of each group. Although social sororities have an important role to play on campus, the main emphasis is on fellowship. In contrast, OPA chapters have an ongoing commitment to community service, not just one or two big philanthropic events per year, but national programs where service hours are tracked. Omega Phi Alpha sisters participate in all kinds of hands-on service projects. Without hesitation, they swing hammers with Habitat for Humanity. They help local Girl Scouts earn badges. OPA sisters help sort out donated food at the food bank and answer the phones at the pledge drive for the local PBS station. They pick up trash on the beach or by the highway. It goes on and on, and the members of each chapter select their own projects.

What is a chapter?

A chapter is a recognized local unit of the sorority. For collegiate members, it is a group of student members who carry on the traditions of OPA at their school and interact with the national organization and other chapters as a group. (Alumnae members often meet with other sisters in alumnae chapters, too. The process described here applies to the founding of a collegiate chapter only.)

As the group works to earn lifetime OPA membership, they are known as a colony, a temporary affiliation with Omega Phi Alpha, while the national expansions director guides them through the colonization process.

How do we become a chapter?

It starts with one person. That person is the campus contact who works closely with the expansions director to set up an informational meeting at a university or college. The colonization procedure is explained to other prospective members, and when 25 or more full-time students demonstrate a commitment to the sorority, they can petition the national organization for affiliation as an OPA colony.

Midway through the process, the colony will organize an off-campus retreat. A representative from the national organization will attend to provide training and fellowship workshops.

How long does this take?

The prospective chapter or colony has up to a year to complete all of the requirements, but technically it could be done in as little as three months. The expansions director will guide the colony each step of the way. When all of the requirements are met, the colony applies for chapter status. National officers and sisters travel from all over the country for the formal induction ceremony.

Who can join? Do I have to be a freshman?

Membership is open to any student in good standing with their university. Pledges can be juniors, seniors, and even graduate students. OPA sisterhood is open to members of social sororities, too. OPA offers something special in addition to what social sororities might have.

OPA members represent all races and ethnic groups. They live on campus, in apartments, and at home. Some are married. Some are in wheelchairs. Some are international students. Basically, OPA members are a diverse cross-section of campus life. This melding of perspectives is one of our greatest strengths.

How do we get our service program started?

While the colony builds membership, think about what areas of service would be interesting to them. Do the colonists want to work with children or the elderly? Would they like to help the underprivileged in the local community by volunteering at a soup kitchen? Are they interested in raising awareness of a pressing issue in the local area? Contact local charity organizations that are looking for volunteers in these areas.