In 1953, a group of male college students in the Zeta Kappa Chapter of Alpha Phi Omega National Service Fraternity at Bowling Green State University decided they needed another organization to help them with projects on campus and in the city of Bowling Green, Ohio. The original thought was to establish another service fraternity at the university. However, after a number of women expressed interest, plans were made to organize a women’s service sorority instead.

Since the objectives of the two organizations were the same: service, leadership and friendship, a similar name was chosen—Omega Phi Alpha. Membership was open to university women who had been Girl Scouts or Camp Fire Girls. (This rule changed in 1958.)

The two groups communicated about the possibility of becoming a national organization, but the concept did not yet fully materialize. 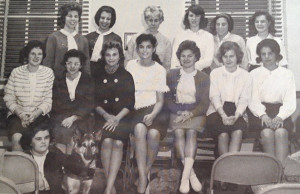 At Bowling Green, a lack of common ground in the requested projects and background of the members led to a great decline in the chapter. But in September 1964, a few remaining members: Carole Close, Bonnie Widder, Maureen Weldon, Joan DeMuth and others decided there was still a need for Omega Phi Alpha at Bowling Green State University. They met with Dr. Jacqueline E. Timm, the original adviser, to see what could be done to reorganize. In order to obtain active membership, they decided to pledge any interested women in good standing with the university.

The response was tremendous. The Fall 1964 pledge class had 105 women. Sixty-seven gained active status. Officers from the prior group remained in office to give the new members time to become acquainted with the organization.

In the spring of 1966, Bowling Green State University’s dean of women, Fayetta Paulsen, notified the chapter that they received a letter from the Omega Phi Alpha chapter in Ypsilanti. The letter said the Michigan chapter had combined with the Connecticut chapter and were now a national sorority. They wanted Bowling Green to affiliate with them. Bowling Green’s chapter president, Pam Gabalac, immediately contacted the chapter’s legal adviser and discovered that the chapters in Ypsilanti and Bridgeport were not legally registered as a national sorority. As a result, Omega Phi Alpha in Bowling Green registered its information first, and then asked the other chapters to affiliate. 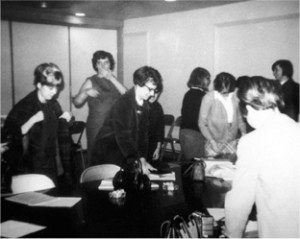 Thirteen months of hard work and organization began. A national organizing convention was scheduled at Bowling Green in June 1967. At the convention, the three groups discussed ideas and agreed to the formation of Omega Phi Alpha National Service Sorority. They decided that the Bowling Green group would be Alpha Chapter, since it had been in existence the longest and had first filed the proper papers to register the Omega Phi Alpha name nationally. Bridgeport retained the name of Beta Chapter, and Ypsilanti became Gamma Chapter.

The consolidation of the three groups was became a reality on June 15, 1967, the official anniversary date of Omega Phi Alpha National Service Sorority.